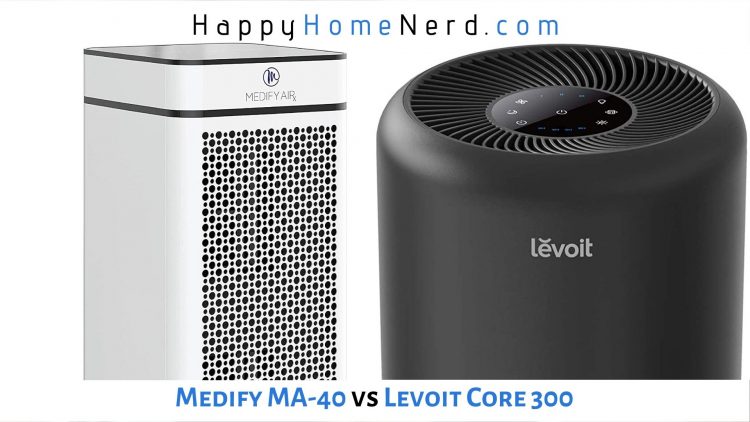 We found two of the most popular air purifiers on Amazon and we’re going to review them now. Our Medify MA-40 vs Levoit Core 300 review will reveal which one is ideal for your room, apartment, or home, so stick around and see which one you need.

Our Levoit Core 300 vs Medify MA-40 review will compare these two based on CADR, coverage area, their filters, fan speeds, and any special features that we find.

Read on to see which is right for you.

This is one of the most important factors you need to know when choosing an air purifier. You don’t want a model that doesn’t clean enough air, because then you’re left with contaminants and the purifier needs to work extra hard. You also don’t want a model that’s too big because it costs more and you’re paying for something that you don’t really need.

Medify air purifier is the more expensive of the two, but its coverage area exceeded our expectations.

The Medify MA40 coverage is 840 square feet, which is among the best we can find in this price range. It’s hard to find an air purifier under $300 that can clean this much. This can be used for multiple rooms or even an entire apartment.

While the Levoit air purifier is pretty good considering its price, it can’t compare with Medify. The Levoit Core 300 coverage area is 219 square feet. That’s not bad for one room, but it won’t be able to clean much else.

As we said, this is a highly important factor, but you need to consider what you actually need. If you want a purifier for your home, then Medify MA-40 is a better fit. If you just want an affordable air purifier for one room, then the Levoit 300 Core might be better.

CADR means Clean Air Delivery Rate and it’s a way to measure how well the purifier is able to clean the air. This shows you how well it removes smoke, dust, and pollen from the air, which makes it a great metric for those who suffer from allergies or are affected by smoke.

Just like with the coverage area section, we want you to keep in mind that there is no perfect CADR and that it depends on what you need. While a higher CADR is always better, you don’t want to go overboard and pick something that you don’t need. At the same time, you need to make sure it’s enough.

So, how much CADR do you need for clean air? It’s a simple formula really. First, find the area of your room. Just multiple length x width in feet. You need to make sure that the CADR is at least two-thirds of the room’s area.

Say your room is 300 square feet. The CADR must be 200 or more to accommodate the size, and to ensure clean air.

Medify MA40 CADR is 380, which is exceptional. Levoit Core 300 CADR is 140-145 on average. It’s best with smoke and rates at 140 for dust and pollen. While this is significantly lower, you need to keep in mind that it’s meant for smaller areas and doesn’t need to be as high.

If you want the best, then Medify is much stronger and more efficient. If you’re just cleaning a smaller room, then Core 300 Levoit might be fine for you.

Both of these use the premier H13 HEPA filter. This is one of the best filters on the market because it’s able to block very small particles and is better than traditional HEPA filters. If you have allergies or just really want clean air, then HEPA H13 filters are right for you.

While they both have H13 HEPA filters, there are differences between them.

First up, Medify MA-40 filters are two H13 filters. Each filter has three layers of protection, so all particles pass through six layers, which ensures that 99.9% of particles up to 0.1 micron in size are captured by the purifier. This is able to remove everyday contaminants such as dust, mold, viruses, bacteria, and much more.

The Levoit Core 300 filter is just a single H13 filter. It’s still amazing, but it captures 99.7% of particles up to 0.3 microns in size. It’s still removing many contaminants, but not as many. Plus, many of the smallest particles are passing through the filter.

One thing we found interesting though is that there are specialized Levoit filters for different purposes. Each is made for a specific purpose. The filters include:

This is important to some people because fan speeds give you control over the purifier and how hard it works. You can increase the speed when there are more contaminants or if the air doesn’t feel clean, and reduce the speed to conserve power and the filter’s longevity.

Both of these filters are exactly the same here, and they have just the right number of fan speeds to choose from. You get three fan speeds with both, which allows for low, medium, and high settings.

Accessing the speed setting is easy on both of them as well. Medify has a glass touchscreen that is smooth and modern. Levoit 300 purifier has a simple button that you push to change the speed.

In general, it’s a tie here and we’re happy that both offer these speed settings.

Both of these come with some great special features, so let’s get into it and see which is best.

The Medify MA-40 special features include a child lock to keep kids out, a filter replacement indicator so you know when to change the filter, glass touchscreen, and a timer between 0-8 hours. That’s a pretty good list of useful features.

The Levoit Core 300 special features include a timer that you can set for 2, 4, 6, or 8 hours, a light that turns off so you can sleep while the purifier runs, and it’s one of the quietest filters at just 24dB.

We think that Medify has better features overall, but our Levoit review found that it’s nearly as good.

Check out our other Medify MA-40 reviews:

What’s the Difference Between Medify MA-40 and Levoit Core 300?

Curious about what’s the difference between Levoit Core 300 and Medify MA-40? We found a good number of differences here. While some can be attributed to size and power since Medify is bigger, others are based on their overall efficiency and usefulness.

Medify offered a bigger coverage area and better CADR, but Levoit might be better if you just want to clean a small room. While both have the H13 HEPA filter, they were very different here. The Medify setup has two filters with better protection. However, Levoit has specialized filters that might work better for you.

While both had unique features, such as Medify’s child lock and Levoit allowing you to turn the light off, we found Medify was the better choice here.

So, which air purifier is best when it comes to Medify MA-40 vs Levoit Core 300? In general, we found that Medify was better, and that’s not just because it was bigger. It offered better CADR for superior cleaning, a much better filter setup, and better overall features. Levoit is good, and its lower price makes it better if you just want to purify one room, but Medify was better overall.

If MA-40 isn’t the right size, then consider checking out one of the other ones we reviewed.