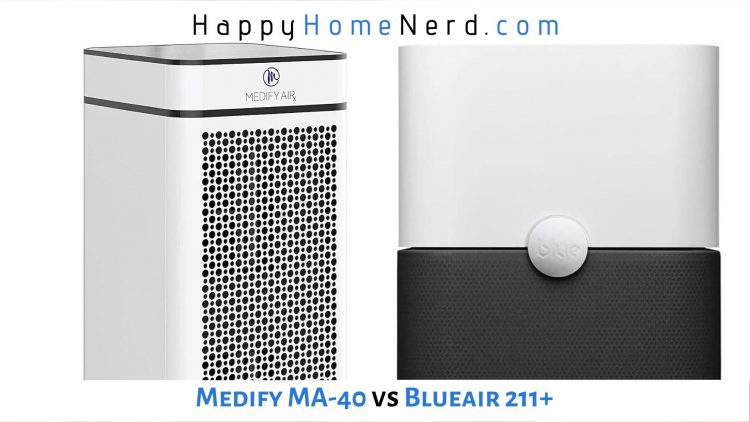 Today we’re comparing two of the most popular air purifiers on Amazon. It’s Medify MA-40 vs Blueair 211+. Both of these air purifiers are incredibly powerful and amazing at cleaning your air, but is one better than the other? They have very different design philosophies and features, so we’re going to compare them to see which is right for you.

Read on to see which is right for your home or apartment.

Both of these filters are about the same price, so you might expect them to have nearly the same coverage area, but there is actually a big difference between them. You should consider the coverage area when placing down air purifiers because this tells you how much space they can effectively clean.

Medify MA40 coverage area is 840 square feet. That’s very good as it can easily clean one large room or multiple rooms at once. Not only that, but many people use this as their main filter while using one or two smaller filters to cover the whole house or apartment.

Blueair 211+ coverage area is 540 square feet. That’s significantly less than Medify. At the same time, there is one benefit to Blueair Pure 211+ that Medify doesn’t have. Blueair 211+ Pure has 360 degree air purification with its unique filter. Medify is like most other purifiers and primarily cleans from one direction.

While Medify is definitely the winner, some people might like how Blueair 211+ cleans the area more equally.

Clean Air Delivery Rate, or CADR, is a metric that allows you to objectively compare different air filters. This is a measurement of how much volume passed through the filter and it shows how well it removes harmful particles such as dust, dander, smoke, and more.

A higher CADR is always better. While it often costs more as well, this means that the filter is cleaning the air better.

There is a difference in CADR here, but it’s not quite as significant as with the coverage area. Medify MA-40 CADR is 380 while Blueair 211+ CADR is 350. Both of these are amazing as they will both quickly remove harmful particles from the air.

While Medify wins here, it’s so close that it’s basically a tie.

The filters here are very different. While both are highly effective, they were made with different properties in mind. Let’s cover them in detail.

The Medify MA40 HEPA H13 filter surpasses normal HEPA standards and removes 99.9% of harmful particles from the air. This includes dander, dust, viruses, smoke, and more. There are two filters with three layers of protection each. This ensures that it captures nearly every particle in the air, making it a highly effective system.

The Blueair 211+ filter isn’t quite as effective, but it’s very close. Their carbon filter removes 99% of particles like pollen, viruses, dust, dander, bacteria, and mold from the air. It’s a small 0.9% difference, so they are both amazing. This also comes with two washable fabric pre-filters. These provide further protection, and being washable means that you won’t have to regularly replace them.

Like with CADR, Medify is technically better, but it’s by a fairly small margin.

Unlike the last two sections, there is a big difference here. Many people like buying air purifiers with multiple fan speeds. This allows you to reduce the speed to save power, or increase the speed for better performance.

Medify MA40 has three fan speeds that are all accessed by the touchscreen on top. Simply push the button to change the speed. It’s very easy and you’ll love having control of the fan.

Blueair Blue Pure 211+ only has one fan speed. In fact, it only has one button. There is a big circle button on the front that turns the purifier on and off. While this is a simpler system, it does reduce how much control you have over the filter.

If you always find yourself putting the air purifier on high, then they are probably about the same. If you like adjusting the speed in order to match the room’s needs, then Medify is the better purifier.

You’re going to see a big difference here as well. One filter has lots of extra features while another one has almost none.

Medify MA-40 is packed with features. It has a timer that ranges from 0-8 hours. This is perfect if you’re sleeping and want to keep the purifier running, or if you only want it to run for a limited amount of time. The purifier also has a child lock, touchscreen operation, and ionizer technology to ensure clean air. It also includes a filter replacement indicator so you’ll know exactly when to change the filter.

Blueair 211+ has the easy single-button operation and the two fabric pre-filters allow you to switch the color of the filter. You can have either the black or blue one in front, which allows you to change the purifier’s appearance.

Medify has better overall features, but it’s nice that Blueair allows you to change its color. Those who want an aesthetically pleasing purifier might really enjoy how Blueair looks.

What’s the Difference Between Medify MA-40 and Blueair 211+?

Curious about what’s the difference between Blueair 211+ and Medify MA-40? As you may have seen, there are a good number of differences we found.

Medify has significantly better coverage area by an extra 300 square feet, but their CADR rating is nearly the same. While Medify’s filter is somewhat better with the HEPA H13 filter, the Blueair filter is 360 degrees and removes nearly as much contaminants from the air. Medify has more fan speeds and features (child lock, timer, filter replacement indicator), but Blueair has two fabric pre-filters that allow you to change the color of the filter.

So, which one is the best? Our Medify MA-40 vs Blueair 211+ review found that Medify is better in most categories. It offers better coverage area, somewhat better CADR, has a stronger HEPA filter, more fan speeds, and more features.

Blueair tends to be quieter, and some people love the different colors that it offers. It also has a 360-degree system while Medify primarily cleans from one direction. Both are great, but we found that Medify is better overall, especially since it’s only a tiny bit more expensive.