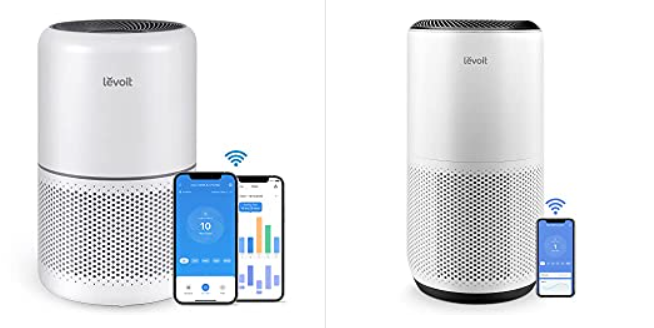 Our Levoit Core 400S vs 300S review will focus on coverage area, CADR measurement, HEPA filter, fan speeds, smart features, and any other differences we can find.

Both of these smart air purifiers are best for living rooms and bedrooms, but it comes down to the size of your room and how much power you want. Their features are similar, but 300S costs less while 400S purifies a larger area.

Is a Smart Air Purifier Worth It?

There are several unique features that you only get with smart air purifiers. First of all, they are far more convenient. You can easily control your purifiers right from your phone. Simply open the app and change the fan speeds, turn the purifier on or off, or even set a schedule. While some regular purifiers come with a remote, they don’t let you set a schedule, nor do they give you the detailed info you get from an app.

Not only that, but Levoit Smart Core and other smart purifiers often have an auto mode that changes fan speeds automatically according to the air quality. This is done by monitoring PM2.5 levels, which is a common air pollutant. You’ll find that this keeps your air clean and breathable without forcing you to toggle back and forth between different speeds.

While you save some money with regular purifiers, you get far more value with a smart home purifier.

There is a significant difference here, and that makes sense since 400S is a larger unit meant to clean larger rooms. That being said, this will be a deciding factor for many people because it’s one of the major differences between Smart Core 300S and 400S. We suggest considering what room you plan on putting the purifier in, as one unit might be better than the other.

Keep in mind that coverage area refers to a space that the purifier can clean five times an hour. You can place these in larger rooms, but they begin to lose efficiency.

Both are great. While 400S is obviously bigger and stronger, those with smaller rooms might prefer 300S.

This is another deciding factor, but it might not be one you’re thinking of. If you’re new to researching air purifiers, then this might be the first time you’re seeing CADR, or Clean Air Delivery Rate.

This is a measurement that refers to how well the purifier can clean the air. A larger number refers to better cleaning ability and better air quality. You should look for a CADR of at least 100, but bigger is better. Not only that, but the CADR must be higher for larger spaces.

That being said, 300S has a CADR of about 140 while 400S has a CADR of 260. This is once again a significant difference, and it shows that 400S is more efficient at cleaning the air. At the same time, a smaller purifier doesn’t need as high a CADR number because it can still efficiently clean small rooms.

Once again, both are good, but 400S is better and it provides better air quality whether it’s in a small or large room. While 300S Levoit isn’t meant for larger rooms, it’ll do a great job in small and medium rooms.

Levoit filters are some of the best you’ll find, which is exactly what you want with an air purifier. Most people want HEPA filters, but you’ll be happy to know that these are engineered to be better than standard HEPA filters because they trap more particles, and they trap incredibly small ones as well.

These both use H13 True HEPA filters. They are able to block particles down to 0.3 microns, and they trap an exceptional 99.97% of particles.This ensures that you can breathe easy as your air will be much cleaner and it will smell better, especially if you want to avoid pet, food, or smoke odors.

This is a tie as both Levoit smart filters have the same number of fan speeds, and they function exactly the same. While we could say that 400S does better because it’s stronger and cleans the air better, we’re only judging these based on the number of speeds and how they work. In that way, these two are tied.

There are five total modes to choose from. You get Low, Medium, and High as the three main settings. Another setting is Sleep Mode, which is extremely quiet and it allows you to sleep with ease. While some might like the white noise of the filter, those who find it annoying will love Sleep Mode.

Lastly there is Auto Mode. We touched on this before, but it’s a version that senses the ambient air and it adjusts speed as needed to ensure the cleanest air possible. This is ideal for those who want a consistent air quality and who don’t want to toggle the speed back and forth. Plus, it’s good to know that you’re really getting the best air quality and not just hoping you are.

These are true smart purifiers as they have several smart home features that work with your phone while also sensing the ambient air quality. They are basically the same in this regard, so it’s a tie, but it’s helpful to know what features you get with Levoit Smart Core.

Starting off, let’s talk about Auto Mode. We consider this a smart feature because it monitors the air quality and adjusts speed as needed. Unlike the regular Levoit Core that only functions at whatever speed you set it at, this one adjusts as needed the optimal air quality.

We found that this makes Smart Core a sophisticated and convenient air purifier that you can use with ease, even if you’re in another room or lying in bed.

What is the Difference Between Levoit Core 300S and 400S?

Curious about what is the difference between Levoit Core 400S and 300S? In some ways they are basically the same, but we did find some differences in regards to their coverage area and CADR. Let’s discuss what the real differences are.

Starting off, how are they the same? They both use true H13 HEPA filters, have five different settings with three speeds and two extra settings, Auto Mode for monitoring air quality, and the same smart features for settings schedules and controlling the purifier from your device.

The major difference between them is how powerful they are. Levoit 400S has about double the coverage area and CADR, which makes it better for larger rooms. Despite being twice as powerful, it’s not twice as expensive, which makes it more valuable. However, Levoit 300S is great for smaller rooms.

So, which is best when it comes to Levoit Core 300S vs Levoit Core 400S? They are very similar, but it really comes down to the size of your room and how much power you are looking for. We would say that 400S is better overall since it has double the coverage area and CADR, but 300S is at a better price and is good for smaller rooms.