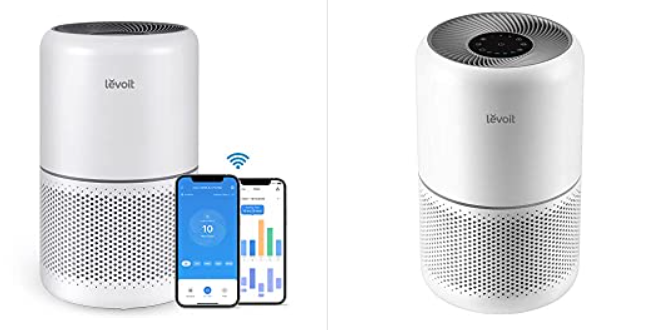 You might be wondering if smart air purifiers are worth it and if they can really improve your breathing quality. While there are numerous purifiers on the market, you’ll find that smart home purifiers have some features you don’t get with regular models. Our Levoit Core 300S vs 300 review will show you which is best for your needs.

Our Levoit Core 300 vs 300S review will compare these based on coverage, CADR, filter, fan speeds, smart features, and then any other differences we can find.

While both are good, we found that Levoit Smart Core 300S has unique features that monitor your air quality and adjust to your needs, rather than waiting for you to input commands. It’s much more convenient and works far better than conventional models.

What Does a Smart Air Purifier Do?

A conventional air purifier usually just turns on and off according to your instructions, and it might have different power settings or a timer. It usually doesn’t actively monitor the air quality, and it’s hard to create a schedule based around your needs.

A smart air purifier on the other hand works with you. First of all, you can connect the Levoit Smart Core 300S right to your phone. This allows you to change settings right from your device, which is extremely convenient. Not only that, but it actively monitors PM2.5 and adjusts speed and power to keep your air always fresh.

What is PM2.5? It’s an air pollutant from fine particulate matter. Not only can it reduce visibility in air concentrations, but it also makes it harder to breathe and many people start coughing around it. Core 300S senses this and removes it as quickly as possible. Regular air purifiers aren’t nearly this sophisticated.

In terms of coverage with Levoit 300S vs 300, both of them are largely the same. This is because the purifiers are very similar outside of the smart features. That being said, they are both good for a single room, especially something like a bedroom where you will be spending much of your time.

Both of these Levoit air purifiers are capable of covering about 219 sqft, which is pretty good for a purifier of this size. While it can clean larger rooms, it’s not quite as effective in very large rooms. Plus, if you pick the 300S, it will scan the room as you are sleeping to ensure the air remains clean the entire time.

While there are air purifiers that are larger and stronger, this is good coverage for the size and price.

Standing for Clean Air Delivery Rate, CADR refers to how well the purifier is able to remove pollutants such as air, dust, smoke, and more from the air. In general, a higher number is always better, but you don’t need to go overboard. Numbers over 100 will make a noticeable difference in the ambient air quality.

So, what can you expect from Core Levoit 300 and 300S? As with the coverage area, these purifiers are basically the same and have the same CADR rating. On average they rate around 140 to 145. It really depends on what you’re measuring, but it does best with smoke while it’s rated at 140 for pollen and dust.

Read on to the filters section, as you can get filters made specifically for certain contaminants. This can help with improving the CADR for specific pollutants that may irritate you more than others.

Once again, both of these come with essentially the same filters, but that’s not a bad thing. Levoit 300 filters and Levoit 300S filters can be specialized to remove certain contaminants better than a standard filter.

Whether you’re choosing the Levoit True HEPA 3 Stage Original Filter, or one of the specialized ones, all of them are rated as H13 True HEPA filtration. This traps particles that are 0.3 microns in size, and it’s able to trap 99.97% of these particles.

Aside from the standard filter, you can also choose from the Levoit Pet Allergy filter, Levoit Toxin Absorber filter, and the Levoit Smoke Remover filter. All of them are great, but we suggest picking up a specialized filter if you have pet, smoke, or other allergies.

You want to make sure you get enough fan speeds to match your needs. Higher fan speeds ensure that more air is cleaned, but it can make the purifier louder while also using more power. While these are similar, this is where you start to see 300S shine.

In terms of similarities, both of these have three main speeds. You get Low, Medium, and High. There is also Sleep Mode. This is an especially quiet mode that is barely audible, but it will keep your room nice and clean. There is a minor difference here as 300 is about 24dB and 300S is 22dB, but both of these are extremely quiet.

The major difference is that Levoit Core 300S has Auto Mode. This is what makes it a smart air purifier as it will actively scan the room’s air quality and adjust the speed as needed. It will increase if there are more pollutants, and will decrease speed after cleaning the air. This ensures that it’s always at the right setting.

While they are close here, it’s Auto Mode that makes 300S the superior purifier.

Here’s another major distinction between Levoit Core 300 and 300S. While the 300 Core is a good air purifier in its own right due to being whisper quiet and having many speeds, the 300S has all that and many smart features.

As we said above, 300S Smart Core comes with Auto Mode, which monitors the PM2.5 levels and adjusts the speed accordingly. This ensures that your air quality remains consistent and breathable.

That’s not all though. Levoit 300S also accepts voice commands through Google Assistant or Alexa. Simply pair the two and you can tell the purifier to turn on, change speeds, and many other features. This makes it easy if the purifier is on the other end of the room, or if you don’t have your phone next to you.

Speaking of your phone, you can control this smart purifier directly through the VeSync app. This allows you to change speeds, set schedules, check air quality, and more through the handy and robust Levoit app.

While these two Levoit purifiers were similar up until now, it’s the smart features that make 300S significantly better.

What is the Difference Between Levoit Core 300S and 300?

Curious about what is the difference between Levoit Core 300 and 300S? If we were only talking about the purifiers themselves, then they are basically the same. However, everything changes once you start looking at the smart home air purifier features.

In terms of similarities, they both have the same coverage area and are made for living rooms and bedrooms. They also have the same CADR measurement, and they can use the same specialized Levoit filters for removing even more pet dander, smoke, and toxins from the air. They are also similar with fan speeds as they have low, medium, and high settings and a sleep mode that’s extra quiet.

However, here’s where the differences start becoming apparent. Only the Smart Core 300S comes with Auto Mode, which senses the air quality and adjusts the speed automatically. You can also pair your phone and purifier to set schedules, change speeds, check air quality, and more.

So, which smart air purifier is the best? We found that both of these are similar, but 300S was the winner here as it has many intuitive smart features that you don’t get with the regular 300. The purifiers themselves were similar, but the added technology makes the Smart Core significantly better.