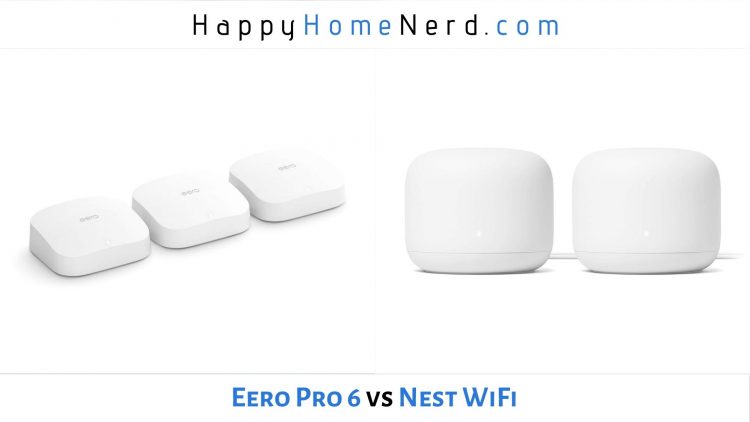 Many people are looking for a Eero Pro 6 vs Nest WiFi review, and it’s easy to see why. On paper, both of these mesh routers appear very powerful and it’s hard to know which is best. However, reality proves that one is great while the other is just alright.

Want to find out which is right for you? Read on to see who wins the Google Nest WiFi vs Eero Pro 6 comparison. We will compare these two based on speed, reliability, distance, software, design, and any other differences that we come across.

A mesh router system is designed to increase your signal’s distance, but what you really care about is speed. We can’t blame you. You’re paying your internet provider for a certain speed and you want to make sure that you get it.

Eero is more upfront about their speed while Nest WiFi is a little secretive. Nest WiFi just promises to give you all the speed you need (that’s pretty vague) while Eero Pro 6 works with gigabit connections.

So, how do they compare in real-world tests?

Eero doesn’t quite reach gigabit speeds, but that’s to be expected. Mesh routers spread the signal out, so the power suffers a little. Eero Pro delivers consistent results and you can expect around 550-750Mbps in most cases. The speed will go down slightly if you have many devices connected, but you should expect great downloading speeds.

What is Nest WiFi speed? Despite their vague marketing, Nest WiFi is actually somewhat stronger. You can expect closer to 800Mbps in most cases. However, we urge you to read the Reliability and Switching section because we have a few things to say about this.

Based purely on speed, Nest WiFi wins, but it’s by a slim margin. You may not even notice the difference unless you’re downloading large files or playing intensive games. They are nearly identical with routine tasks and streaming movies.

We are going to break this section down based on stability and switching. Nest WiFi won the last section on speed, but it suffers significantly here.

Let’s start with stability. Eero Pro 6 is incredibly stable. There is the occasional lag here and there, but that’s expected from any router. You will very rarely face any problems where the internet randomly goes down and stops working. Plus, the speed stays consistent when you’re connected to the router. You shouldn’t have to worry about it going up and down.

Nest WiFi is a different story. Many people have found that the signal tends to lag or that the speed will randomly drop to around 10Mbps. Sometimes this gets fixed on its own, other times you will have to restart either your device or the router to correct the issue.

This doesn’t happen all the time, but it happens often enough to get annoying. Recent firmware updates have made the issue better and it seems like Google is aware of the problem, but we still have to say that Eero is far more stable.

Things are similar with switching.

Switching is when a different node takes over. This is really important with mobile devices when you’re walking from room to room. Some mesh servers need a few seconds while others are seamless.

Eero falls into the seamless category. This is actually Eero’s best feature. The switch is so fast that you’ll very rarely notice it. Your speed and signal strength should remain consistent, and lags are extremely rare.

That’s because Eero Pro 6 tri-band router has three channels of communication. Two are reserved for your use while the third allows the nodes to communicate. This is very efficient and ensures that switching is seamless and reliable.

Nest WiFi is OK at switching. You’ll probably notice a second or two goes by as the new node takes over. You’ll really notice it if you are walking around the house and going between different nodes. However, the switch is still fairly fast and pretty reliable.

Many top routers, like Orbi AX6000 and Eero Pro, are tri-band routers. However, Nest WiFi still relies on dual-band communication, like the Eero 6: Plus. This is an OK setup, but it leaves one less channel for communication, which makes it hard to switch or do other tasks without interrupting the bandwidth.

We’re surprised to see this since Nest WiFi is priced like a mid-tier to premium router, but it lacks this fairly standard feature found in most other routers at this price range.

Which router has the better range between Eero Pro 6 vs Google Nest WiFi? Let’s find out.

The major reason you’re getting a mesh router system is to increase the range of your signal. You want to ensure that the whole house is able to connect. Plus, you want to ensure you get a good signal no matter where you are.

While there is a winner here, it isn’t by a significant margin.

Every Eero Pro node reaches about 2,000 sqft while every Nest WiFi node has a range of 2,200 sqft. The most popular configuration is three nodes, so Eero would be around 6,000 sqft while Nest WiFi would be 6,600 sqft.

Google Nest WiFi wins, but it’s only by a little. We would say they are functionally about the same, but if you really need that extra little distance, then Nest WiFi by Google might be best for you.

If you’ve read our other Eero Pro 6 reviews, then you’ve seen that Amazon Eero doesn’t have a web-based interface. Some people might be disappointed because they’d prefer to control their mesh routers through the computer, but it makes up for it by having a fantastic app. Honestly it’s one of the best apps we’ve ever seen.

Nest mesh routers are similar in that there is no web-based interface, but there is an app to control the routers. However, how do the Eero vs Nest apps compare?

The Eero app is basically the same for every router, so whether you’re getting the Pro 6 from Eero or any other model, like Eero 6: Plus, you’re getting the same great features. This app allows you to easily group devices, pause the network, set timed access, check bandwidth.

There isn’t a specific Nest WiFi app (unlike with Google WiFi, which has its own app). It is instead the Google Home app. While many of the features are good, the interface is cluttered and difficult to navigate.

You can also group devices, pause the network, and check bandwidth for devices. The bandwidth section is organized from most bandwidth to least, which can be very helpful. It also has a free adult content blocker. Eero does the same, but it costs $3 a month for the same feature. You do need a Google account to install the router and to access the network, which might be annoying if you don’t already have an account.

Overall both have good software, but Eero is better because the app is easier to use. Nest has a few more features, and the free adult content blocker is nice, but we prefer the convenience of Eero.

When we compared Eero 6 Pro vs Orbi AX600 vs Orbi RBK752, we brought up how great Eero looks while Orbi was OK at best. However, our Nest vs Eero review found that both of these routers look fantastic. They might have a modern, sophisticated look and a compact design that makes the routers easy to position.

Eero is a small square with rounded corners, glossy white finish, and the Eero logo emblazoned on top. Nest WiFi has completely rounded edges, matte white finish, and a small Google logo on the top. The Google logo isn’t as noticeable as the Eero one, which some people might prefer. It’s hard to say if glossy or matte white is better, so that might come down to personal preference.

A similar mesh router is Google WiFi, but it’s significantly better than Nest WiFi. Check it out with our Google WiFi vs Nest WiFi review.

They are also functionally the same with ethernet ports. Both include two ports per node, and the main gateway node needs to be connected via an ethernet cable. This means you get three total ports with a two-piece system and five ports with a three-piece system.

We’ll call this section a tie. They both look fantastic, are compact for easy installation, and have the exact same number of ports.

What’s the Difference Between Eero Pro 6 and Nest WiFi?

Curious about the differences between Nest WiFi and Eero Pro 6? While they both have fantastic designs, we found numerous differences under the hood.

When it comes to speed, Nest WiFi is slightly better then Eero Pro. At the same time, Eero easily wins the battle of reliability and switching. Eero is fantastic at switching (no matter which model you choose) and you’ll almost never notice the network lag when a new node takes over. Plus, the background communication between the nodes ensures great reliability.

By comparison, Nest mesh router isn’t nearly as reliable. The network lags every now and then, plus there will be times when you need to restart the network to get your speed back. It’s not enough to be a major problem, but it’s annoying.

Both routers used an app interface only for controlling the network. However, Eero has one of the best apps we’ve ever seen while the Nest’s Google Home app is cluttered and somewhat harder to use. We do have to say that Nest does have a few more features though, and the free parental controls could be useful based on your needs.

Nest is somewhat better at distance, but they are very similar in general here.

Which is Better: Nest WiFi or Eero Pro 6?

Want to know which is better with Eero Pro 6 or Nest WiFi? On paper, Nest WiFi has better speed and some better features, such as having free parental controls whereas Eero has them for $3 a month (which isn’t bad to be honest, but not as good as free). Also, Nest’s design might be more appealing to some, and Google is a good brand to get behind in most cases.

However, we have to give the win to Eero overall. While its speed and range are both smaller, it’s only by a small amount. It makes up for this for having one of the best apps we’ve ever seen, plus it’s incredibly reliable and has super fast switching. Plus, it’s one of the easiest mesh routers to install. You shouldn’t need more than 10 minutes even if this is your first mesh router.

Another big advantage is that Eero tri-band uses three communication channels, which really improves reliability. Nest only uses two channels, which limits how quickly the nodes can talk with each other.

Nest is good, we can’t deny it. But, we think that Eero is going to be better for most people.

Nest WiFi from Google is a good mesh router and some people might prefer it. It does have slightly better speed, and the distance is somewhat better as well. However, we feel that Eero Pro 6 is the real winner here. Not only is it easier to install, but the app is fantastic and it’s one of the most reliable mesh routers available.

So, which one did you choose? Be sure to let us know.